When the going gets tough, the tough get going. So today when the odds were heavily against the Vikings, they raised their game and emerged victorious in a match that was a virtual semi-final. The Vikings not only had to win the match, but they had to win with a huge margin. Vikings won the match against the Targaryens in 6.5 overs and qualified for the final.

Targaryens captain Rageesh won the toss and elected to bat first. Openers Rishi and Vishnu gave a sedate yet steady start to the innings. Though Rishi tried to speed up the scoring with a huge six in the first over, both openers fell upfront. Aneesh accounted for both the batsmen. Baji too was unable to up the scoring and fell for 6 runs to a brilliant delivery by Sumesh. The onus of steadying the ship then fell on Vineeth and Sreejith. The duo played some sensible cricket, which included some big blows to the boundary and some singles and doubles. In the end Targaryens were able to make 61 runs in the allotted 10 overs with the loss of 3 wickets.

With the tough ask of winning the match in few overs as possible, Vikings started their innings with captain Emmanuval and Sujith as openers. In the first few overs the openers looked to come in terms with the pace of the pitch. Especially with Rageesh in the bowling attack it is always safe to start cautiously. But once they had the measure of the attack, Vikings’ openers opened their shoulders and hit some lusty blows to up the ante. At the end of the third over the score was just 13/0, but in the fourth over some big shots from the batsmen took the score to 30. Then there was no looking back for the Vikings openers. Though Sujith and Saneshmon lost their wickets at the fag end of the innings, Emmanuval made sure that there are no further panic.

Sujith was adjudged the Man of the Match. 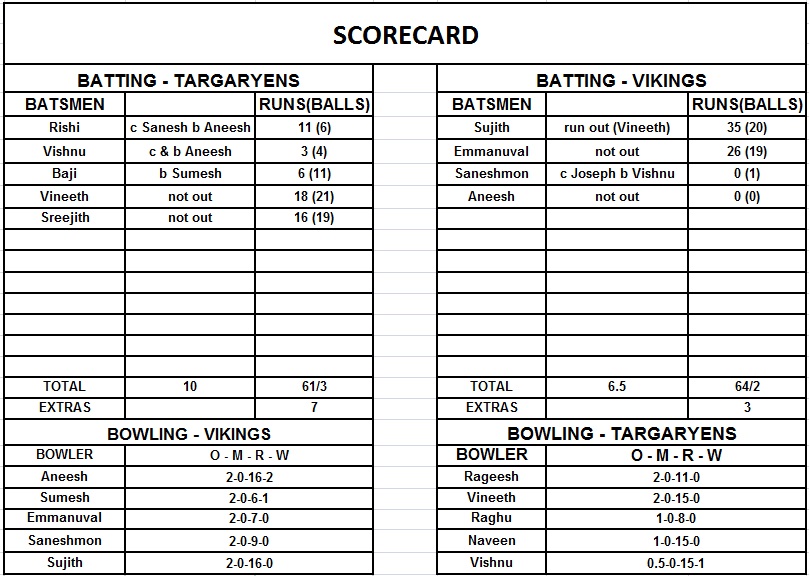