Sweating as a result of cover on the pitch meant that batting would be a difficult proposition. Therefore the Targaryens captain Rageesh had no hesitation in choosing to bowl first when he won the toss. Nikhil and Linto started the innings for the Calpine Raiders. However those who expected to see a blistering batting performance of Nikhil, one of the costliest players of the season, were left disappointed as he lost his wicket in the second over of the innings. Inspiring bowling performance from Rageesh was the highlight of the innings as he restricted the Raiders’ batsmen from running away with the match. In his allotted 2 overs, Rageesh gave away only 3 runs and bagged 3 prize wickets of the Raiders.

But a gutsy batting performance from Linto, the top scorer for the Raiders with 25 very important runs, made sure that all was not lost for the Raiders. He, along with Rakesh, Abhin and Ranjith E took the score to 58 runs. In a difficult pitch, it was a fairly competitive score.

Though the morning sun eased the pitch to some extent, batting was still not that easy. Openers Rishi and Baji of Targaryens started off with the bang, when Rishi hit a six in the second ball of the innings. Then the openers mellowed down and rotated the strike with singles and doubles. But against the run of play, Rishi got run out after scoring 10 runs. The experienced Baji then partnered with the ever dependable Vishnu and scored with caution, without causing any panic to their team in the dugout. In the 9th over of the innings, Targaryens reached their target with the loss of just 3 wickets.

Rageesh was adjudged the Man of the Match for his superb bowling performance. 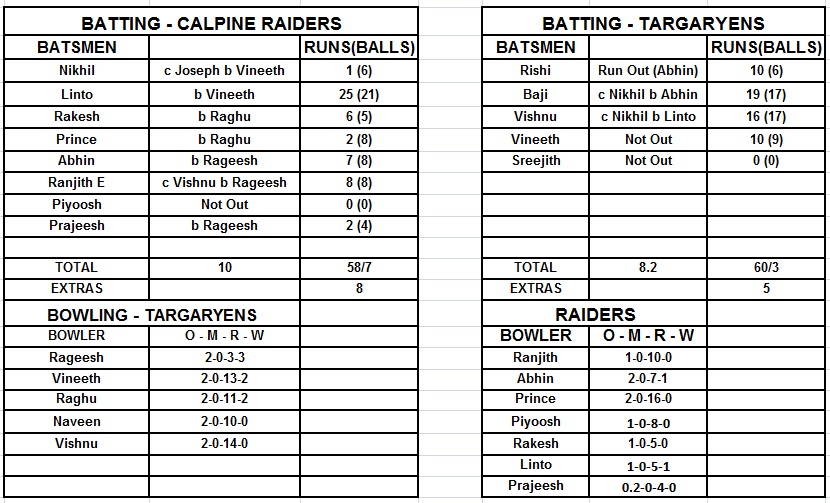