Another damp playing condition, another low-scoring cricket match in CCL.

In the second match of the tournament Calpine Raiders emerged winners by 6 wickets after they sunk the Viking Cricketers with some terrific display of precision bowling.

On winning the toss the Raiders’ captain Nikhil decided to bowl first on a batting strip that appeared difficult to bat on. In the first over of the match itself, Raiders’ star bowler Abhin showed why his captain’s decision was the right one as he dismissed Saneshmon and Emmanuval in the space of two balls. Two brilliant catches from Rakesh and Binish resulted in the first over dismissals. It must be noted here that the match would be, in the main, remembered for the enthusiastic fielding display by both teams. Sujith tried his level best to bring some stability to the Vikings’ efforts with his hard fought 24 off 27 balls, but he failed to get any support from the other end. Vikings lost wickets at regular intervals and was able to get only 44 runs in the allotted 10 overs, with the fall of 9 wickets. Outstanding bowling performance from Abhin was the highlight of the innings as he took 4 wickets in his 2 overs, giving away only 3 runs. Linto also chipped in with 3 wickets in his 2 overs, conceding just 8 runs.

Chasing a moderate target of 44 runs in the 10 overs, the Calpine Raiders lost an early wicket when Ranjith E was caught brilliantly by Emmanuval off his own bowling. A return catch that would have gone down from the hands of an ordinary fielder, struck on to the hands of the exceptional fielder Emmanuval. After the fall of the wicket, Dibin joined Linto and slowly moved the scoreboard forward. The twist in the game happened when Raiders’ captain Nikhil joined Dibin in the centre after the fall of Linto’s wicket. Though he missed out on his previous outing, Nikhil was in no mood to let go the second opportunity he got to demonstrate his batting prowess. He was severe on loose balls and made a quick fire 26 off 13 balls, sniffing out any hopes the Vikings would have had till then in snatching a win. Calpine Raiders chased down the target in 7.2 overs to register their first win of the season.

Abhin was adjudged the Man of the Match for his brilliant bowling performance. 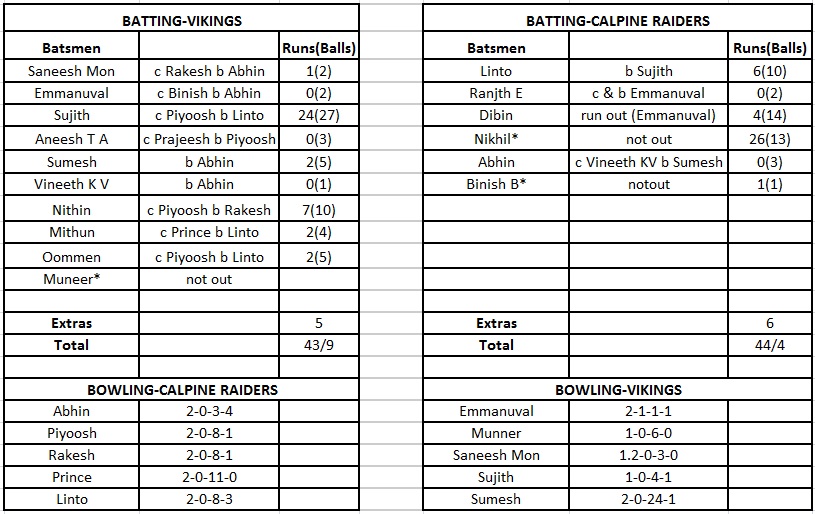